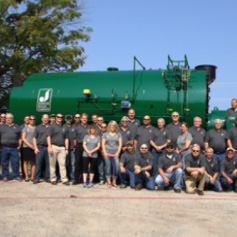 Last year, we were approached by Founders Brewing; a major producer of beer located in Grand Rapids, Michigan, with a request to quote a new 400 HP boiler intended for use in their planned $40 million plant expansion. Understanding that this new boiler would be a vital component in the planned plant expansion Founders was unwilling to compromise on quality or dependability.

Founders had specific requirements that needed to be addressed and they made it clear that Johnston was only being considered because they knew our reputation as an industry leader in quality. Alec Mull Director of Brewery Operations and Shane Dood, Brewery Maintenance Manager visited Johnston’s manufacturing plant and they asked some tough questions.

We know that long term relationships take time to develop. Holding true to founding principles such as patience, integrity, an open honest dialog can sometimes be difficult, however the long term benefits are well worth the effort. Understanding that a primary goal at Johnston Boiler Company involves establishing long term relationships with individuals and organizations based on those principles, we were unwilling to over promise our production capabilities.

It was only after careful consideration that Founders selected Johnston Boiler Company as their source of supply for this equipment despite our extended manufacturing lead times. Founders believed it of more value to patiently wait for the better product rather than purchase an inferior product with a quicker turnaround. And, as an added bonus, we also secured orders for auxiliary equipment intended to support the boiler operation.

Congratulations to our manufacturing team for their willingness to pay attention to details and maintain product quality despite pressures to rush production. Johnston’s manufacturing team is world class and it makes selling those big green machines all the more enjoyable.